I can’t wait for y’all to hear my new album!!

I’ve been working hard with my trio in the studio on the new music, and we’re already booking dates into next year, and some will be CD release parties. We’re looking at a tentative street date in March, so keep an eye on my Tour Dates page to watch for shows in your area. 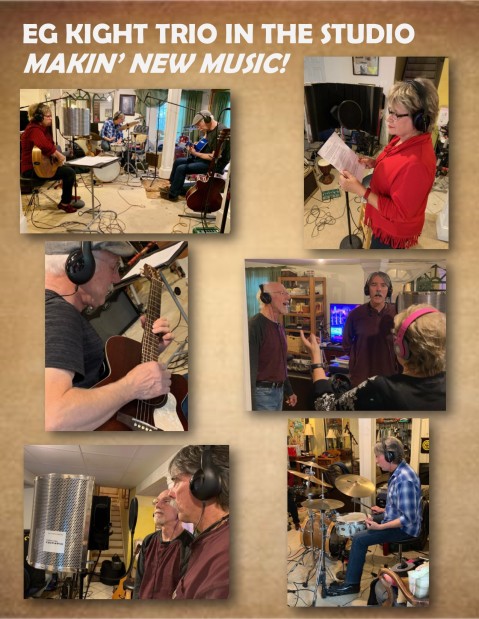 We’ll be releasing a single soon, so watch for news about that, too. We’ll announce things on my facebook music page, so be sure to hop over today and “like” that page, so you can stay up-to-date on all this exciting stuff going on.
https://www.facebook.com/EG-Kight-Music-224059361025039/

I’ve had a blast performing a lot of shows this year so far. I’ve been on stage in many different states and various venues, and I’ve gotten to do repeat shows at some of my favorite places, because they keep asking me back!

I’ve been to the Songbirds Guitar Museum in Chattanooga, the Vineville Music and the Arts series in Macon, Bradfordville Blues Club in Tallahassee, the Hey Hey Bar & Grill in Columbus, the Crimson Moon, the Tunes by the Tracks concert series, WMOT’s Finally Friday show in Nashville, several summer concert series, a coffee house, a garden club, an apple orchard, a Blues Society event, a yacht club, an auditorium, house concerts, and several private events. I’m just takin’ my shows everywhere, letting the fans soak up all the blues/roots/americana/R&B music I can toss at them!

Along the way, my fans are so good to me, showering me with love, and lots of Lay’s potato chips! Look what they did at a recent house concert in Knoxville!

I love my fans. I love my music. And I love my life. I’m so blessed…

Till I see you out there on the road, Keep a song in your heart!

I had such a great time at the Blues Music Awards in Memphis! It’s always great seeing old friends and meeting new ones. And this year I had the honor of presenting at the awards show, with the talented Eden Brent. There we were, two southern women, talking about the nominees, and handing out some awards. I just hope everyone understood our southern talkin’!

Our new Blues Foundation President, Barbara Newman, had called me weeks earlier to see if I could bring one of my goats to the show. I was afraid it would try to eat everything on stage, and fertilize it too, so I brought a stuffed goat instead. And now, Memphis Billy, my little stuffed goat is famous! Here he is after a long day in Memphis, ready for bed.

Not long before heading to Memphis I found out that a fantastic artist, Shaun Murphy, had just released a new album with two of my songs on it. She’s what I call “a singer’s singer!” I had the chance to spend a little time with her in Memphis. Be sure and check out her CD, “It Won’t Stop Raining”. 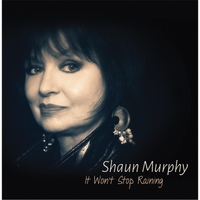 I’ve gotten a lot of nominations through the years, and every time I’m honored just to be considered. This is my first Independent Blues Awards nomination, for Best Female Artist. You can VOTE, and tell all your friends. But do it quick! Voting ends June 1st. http://www.makingascene.org/vote-now-independent-blues-awards

If you’re in the tri-cities area, up near Knoxville next week, y’all come see me at the Renaissance Arts Center in Kingsport, TN. I’ll be sharing the stage with Becky Hobbs and Lucy Billings, doing a “songwriters in the round” show. It’s gonna be a lot of fun, performing our original songs, and telling how they were born. Some tickets are still available. You can read all about Lucy and Becky, and get ticket info at http://www.bluesouthtalent.com/latest-news. 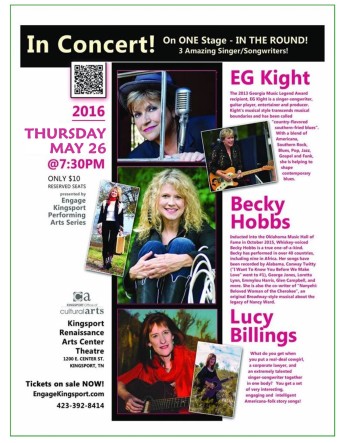 I have a show coming up at the Allman Brothers Big House in Macon, GA in June. Michael “Buffalo” Smith and a couple other writers and I will be doing some original songs. And I’ve got some private parties, and house concerts coming up, too. I love performing at house concerts. I’ll be at several Ohio venues in June, and my Blue South Band and I have shows coming up at Bradfordville Blues Club in Tallahassee and Capitol Oyster Bar in Montgomery. Then in August I’ll be making a solo appearance at the Cincy Blues Festival opening for a Saffire reunion.

Later in August I’m going to be doing something I’ve never done – flying to Jackson Hole, Wyoming to take pictures! This has been on my “bucket list” for a long time I’m so excited about this trip and look forward to giving my camera a work out!

Be sure and keep an eye on my Tour Dates page because it changes all the time.

I hope to see you on the road somewhere. Until then, keep a song in your heart!

Happy Summer! Yea, it’s hot in Georgia. How is it where you are? I hope you had a good time on the 4th of July. What a great country we live in. We’re so lucky.

I had a wonderful time in Williamsport, Pennsylvania last month. Billtown Blues is one of my favorite festivals! I had a reunion with my northern band – Jeremy Jaffe, Tim Hooper, Sean Farley and Andy Seal – and they rocked it on stage at the festival. And my trip was made so much easier because of Roadie Jim Boose, and all of his hard work road managing. Thanks to all the guys!

At the festival I also got a chance to sing with a young teen band, The Black Strat Blues Company. It does my heart good to see young people playing music, especially when it’s the Blues. There are some great young players out there.

I’m proud to announce that the album Paul Hornsby and I produced this past year for Lisa Biales has been nominated for a Blues Blast Award! “Belle of the Blues” is up for Acoustic Album of the Year! We’re all so excited about it, and Lisa will be singing at the awards show. You can vote here: http://www.bluesblastmagazine.com/bbmas/vote/

And more good news! I couldn’t wait to tell you that I’m finished with the new CD! The title is “A New Day” and I can’t wait for you all to hear it. I have some CD release parties coming up, so keep an eye on my schedule. We’re adding dates all the time, and we’ve got offers coming in left and right. I hope to see YOU in your city soon! 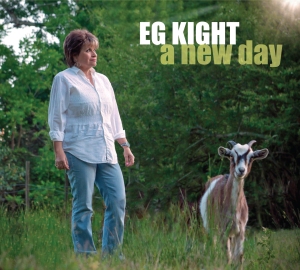 This Friday I’m at the Museum of Art in Knoxville with my band, then next week I’m performing solo for a private corporate team building event in Hobart, Indiana. On August 2nd my band and I return for a CD release party in Tallahassee at Bradfordville Blues Club. Then my boys and I will head to Port Royal, South Carolina for a Music in the Streets concert series. And in September, I’ll be doing a duo with Lisa Biales, as the “Peach Pickin’ Mamas” at Pruis Hall at Ball State University. I’ve got lots going on and it’s all good!

Whether it’s solo, with Lisa as a duo, or with my band, I love performing on stage! And I’m so grateful to all the fans who keep buying tickets and coming to the shows. Ellen Altamore even drove all the way from Michigan to see me at Billtown in Pennsylvania! And for every one of you who buys my CD’s, and emails me and sends me messages on facebook – your thoughts and encouragement, and your sweet comments keep me going! 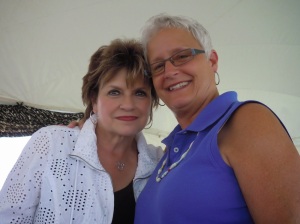 Don’t forget to check the Tour Dates page, and mark your calendars for these upcoming events. Then you can bring all your friends and family and get your own copy of “A New Day”. Let’s celebrate y’all!

Until I see you, keep a song in your heart!

Another great BMA show, just finished up in the studio, my new camera, Billtown this weekend!

I just wanted to catch you up on what’s been going on with the Songbird. I attended the Blues Music Awards in Memphis and as always, I had a natural ball. I got to be part of the VizzTone jam at the Rum Boogie on Beale, and talk about a good time! It was happening there!  I got to jam with Bob Margolin, using Little G Weavil‘s amazing guitar. It was an awesome evening!

And then the next night, it was the Blues Awards night, and what an outstanding show! I’ve made so many friends by attending the Blues Awards every year and it’s always like a family reunion when we all get together. I met up with my “Peach Pickin’ Mamas” partner, Lisa Biales, and she and I did some radio spots. We did a fun interview with Jesse Finkelstein for Blues Radio International. I’ll let you know when that show will air.

Lisa’s CD is doing great and I was happy to introduce her to some of my friends in the industry. Here I am at the BMA’s with some of my favorite people – Lisa Biales, Reba Russell, and Teeny Tucker.

I’ve been working hard on my upcoming album. My band helped with the arrangements on several of the songs and played their butts off in the studio. I’m so proud of the way they put so much of themselves into these songs. The creative juices were really flowing!

Here’s my band after a session in the studio – Paul Hornsby/engineer and producer, Gary Porter/drums, Mike Harrell/piano and organ, Ken Wynn/guitar, and Johnny Fountain/bass.  I love these guys! 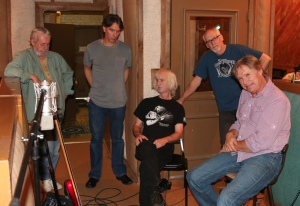 And here’s Gary and his wife, Rhonda Porter. They helped me with background vocals, and she’s my soul sister!

It looks like the new CD, entitled “A New Day,” will be officially released in September. But I’ll have a few CD release parties prior to the national release. There will be one in Knoxville on July 18th, one in Chattanooga on July 19th, and another in Tallahassee on August 2nd. We’re working on several more, and we’re also in the process of booking some mini-tours in other states. I may be coming to your town, so just keep an eye on my schedule to see what’s going on. We’ll post the dates as soon as they’re contracted.

This coming Sunday, I’ll be performing at the Billtown Blues Festival in Hughesville, Pennsylvania. I’ll be joined on stage by my Northern Band, some great guys I used to play with some years back. I can’t wait to see them again, and all of my friends in Pennsylvania!

The goats are doing fine and I get such comfort from them when I get stressed. Here’s Sippie and me, enjoying a moment together.

I’ve also been enjoying my new camera. Here are a couple of photos I’ve taken lately. Can you tell I’m lovin’ it?! 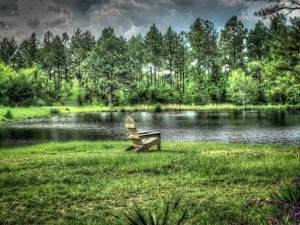 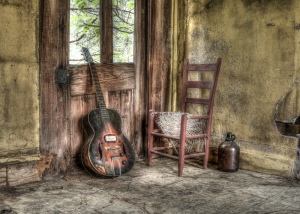 Well, it’s back to work on the new CD. I need to get my part of the cover finished so we can wrap this baby up!

I hope to see you along the way. Until then, keep a song in your heart!

.For the full schedule, click on the “Tour Dates” tab.

Knoxville, let’s raise some money for the hungry!

Knoxville, let’s raise some money for the hungry!

Back on the road again!

I’m headed to East Tennessee this weekend. Come see me!